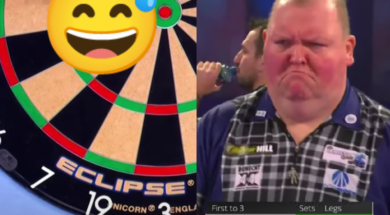 20 december 2020
SportVideos
69.79K
During his game against Jonny Clayton it was John Henderson who had a remarkable checkout in the first leg of the match. Watch how he found a new way to do a 35 checkout.
Read more 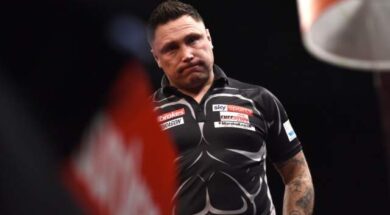 Gerwyn Price Gets Negative Response After This Post On Social Media

28 december 2021
SportVideos
69.73K
Gerwyn Price wasn’t popular with the crowd during his match against Kim Huybrechts last night. But he got even more criticism and negative reactions after he posted the picture below on his Instagram stories.
Read more 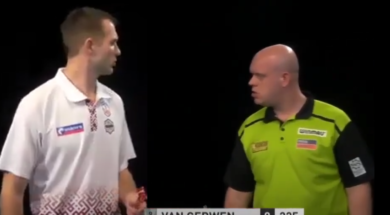 28 februari 2021
SportVideos
66.37K
During today’s Super Series there was an incident between Michael van Gerwen and Madars Razma. The player from Latvia stands all the way to the right before moving towards the oche. Van Gerwen wasn’t happy with his limited space to walk back which turned into this moment below.
Read more 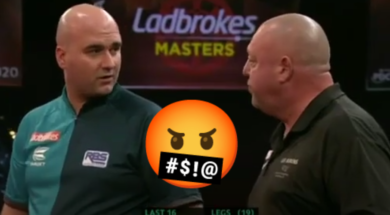 30 januari 2021
SportVideos
65.59K
During the match between Rob Cross and Mervyn King there was this incident. Cross step over the line of the oche and according to Mervyn King this shot was illegal and he was not happy. Different angle of this moment
Read more 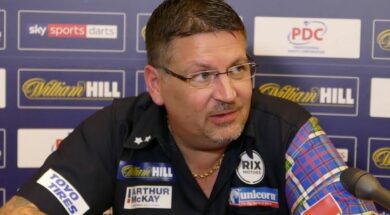 28 december 2018
SportVideos
63.83K
Despite his win over Chris Dobey we saw a furious Gary Anderson after the match. In an awkward interview he wasn’t happy at all and he was pretty aggressive towards the interviewers. At one point he even mutters “What a stupid f*cking question”. Also watch his second interview when he is talking about ”Darts is […]
Read more 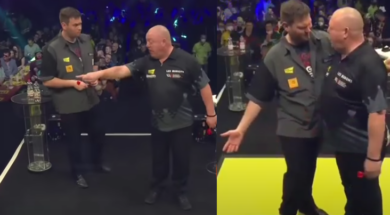 26 februari 2022
SportVideos
62.17K
During the match between Mervyn King and Janos Vegso there a lot of tension. The Hungarian player got into the exclusion zone multiple times which made King furious. Watch this moment below.
Read more 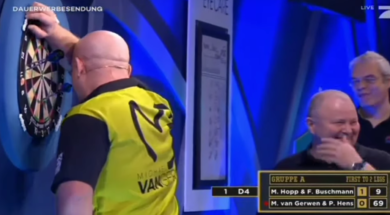 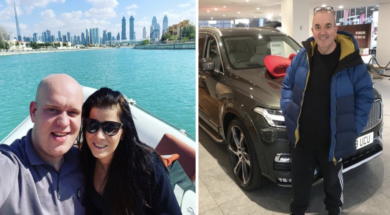 27 januari 2021
SportVideos
56.08K
Darts can make you earn big money these days. But who has made the most in his career so far? We take a look at the top 10 richest darts players with the highest career earnings.
Read more 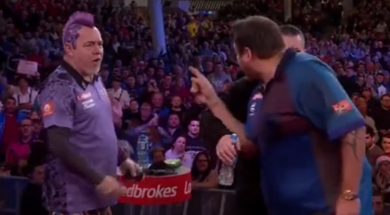 27 november 2021
SportVideos
56.05K
During their match at the Players Championship Finals there was this incident with Adrian Lewis and Peter Wright. It all happened during the 5th leg of the game when Snakebite walked back when he was on a double. The commentators believe it was about a loose floorboard. After the game they continued discussing and even […]
Read more 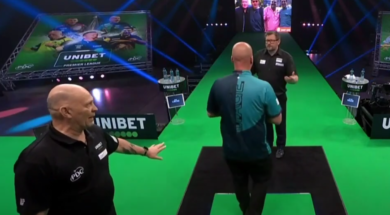 7 april 2021
SportVideos
55.25K
During the second night of the Premier League 2021 there was this strange moment before the game between James Wade and Rob Cross. The Machine threw 6 darts in a row which is not allowed and after that moment Russ Bray left the stage because he had to pick up something…
Read more
Pagina 2 van 444«12345...102030...»Minst recente »
Close