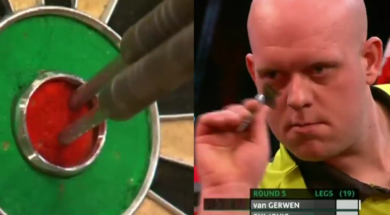 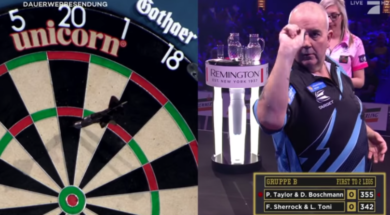 5 januari 2020
SportVideos
26.39K
At the PDC World Championship she did beat Ted Evetts and Mensur Suljovic and now she had to face the 16 times World Champion Phil Taylor. Watch Fallon Sherrock in action against Phil Taylor at the Promi Darts WM 2020 last night If you missed this tournament you can watch more matches here. [adrotate banner=”12″] Also […]
Read more 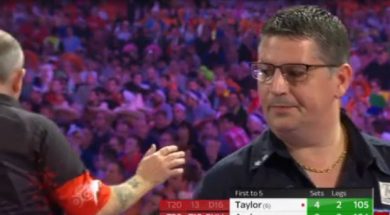 Gary Anderson Calls Taylor A Prick After His Hand Gesture

30 december 2017
SportVideos
23.51K
Phil Taylor wasn’t happy with a 96-score at a very important moment in his semi final with Gary Anderson. The Power made some hand gestures which Anderson saw while he was throwing. The Flying Scotsman was shaking his head and after his throw he called Taylor a ‘prick’. [adrotate banner=”7″] ﻿ [adrotate banner=”7″]
Read more 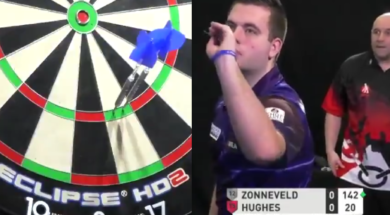 17 maart 2021
SportVideos
23.42K
During today’s PDC Super Series it was Niels Zonneveld who produced some incredible darts. Watch how he hit a reversed 9 darter in the video below.
Read more 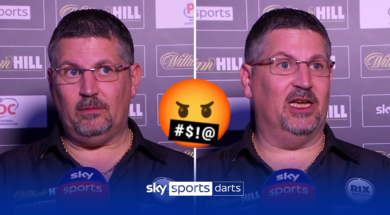 Gary Anderson Threatens To Leave Darts: “If That’s Darts Then I’m Off” 😡

28 december 2020
SportVideos
23.31K
Gary Anderson wasn’t happy with Mensur Suljovic who was slowing down the game big time. The Flying Scotsman did win the game but he was threatening to leave darts if it is played in this way. Watch the full interview below. Also watch: ANGRY Gary Anderson Calls Wayne Mardle A Numpty Gary Anderson: “Absolutely dire, absolute […]
Read more 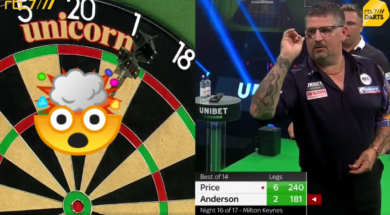 5 september 2020
SportVideos
23.05K
Gary Anderson had a bizarre moment in his match against Gerwyn Price tonight. He was on 181 when he did something we have never seen before. Even The Iceman was amazed and couldn’t believe his eyes.
Read more 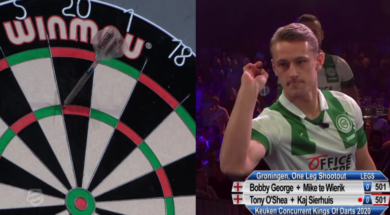 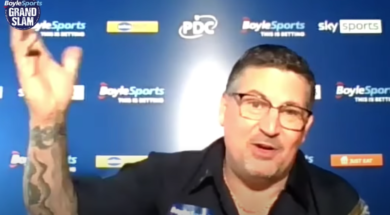 19 november 2020
SportVideos
21.93K
Gary Anderson is not happy with many of his colleagues and claim they show bad sportmanship. After his first game he said Adam Gawlas was cheating and after his second game in which he did beat Ryan Searle he again was furious. Watch the moment below when he says: “They’re not dart players, they’re just cowards” […]
Read more 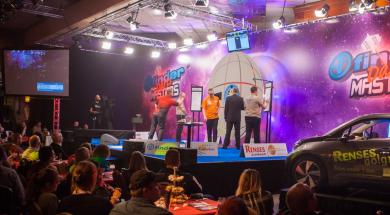 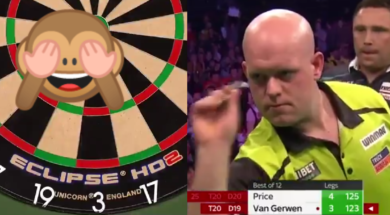 13 maart 2020
SportVideos
21.78K
Lately we have seen some remarkable checkouts in darts and this week we saw another one in the Premier League night at Liverpool. The Dutchman showed a 123 checkout in a way we have never seen before… Update: It turns out Michael van Gerwen did the same shot 12 years ago as you can see […]
Read more
Pagina 5 van 398« Meest recente«...34567...102030...»Minst recente »
Close